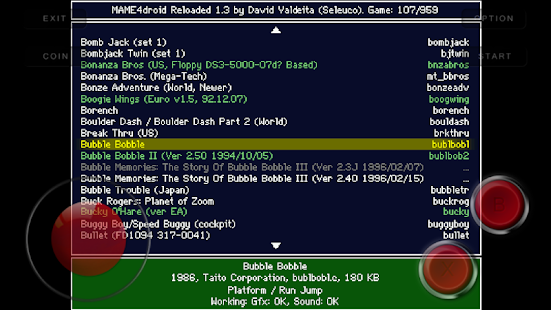 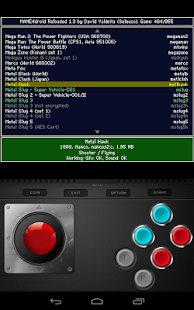 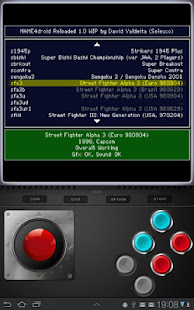 MAME4droid (0.139u1) is developed by David Valdeita (Seleuco) as a port of the MAME 0.139 emulator by Nicola Salmoria and the MAME team. It emulates arcade games supported by this version of MAME which includes over 8000 different ROMs.

* MAME4droid is an EMULATOR and DOES NOT INCLUDE ROMS OR COPYRIGHTED MATERIAL OF ANY KIND.

This version of MAME4droid was designed to be used with dual-core Android devices because it is based on the PC MAME version which requires higher specifications than the older versions.

Even with a high end device, do not expect “modern” arcade games from the 90s and beyond to necessarily work at full speed or compatibility. Some games like Outrun and the Mortal Kombat series are badly optimized and require at least a 1.5ghz dual core device.

With over 8000 games supported, some games will run better than others; some games may not run at all. It is impossible to support such a vast number of titles, so please do not email the developer asking for support for a specific game.

After installing, place your MAME-titled zipped roms in /sdcard/MAME4droid/roms folder.

Redistribution and use of this code or any derivative works are permitted provided that the following conditions are met:

* Redistributions may not be sold, nor may they be used in a commercial product or activity.

* Redistributions that are modified from the original source must include the complete source code, including the source code for all components used by a binary built from the modified sources. However, as a special exception, the source code distributed need not include anything that is normally distributed (in either source or binary form) with the major components (compiler, kernel, and so on) of the operating system on which the executable runs, unless that component itself accompanies the executable.

* Redistributions must reproduce the above copyright notice, this list of conditions and the following disclaimer in the documentation and/or other materials provided with the distribution.

THIS SOFTWARE IS PROVIDED BY THE COPYRIGHT HOLDERS AND CONTRIBUTORS “AS IS” AND ANY EXPRESS OR IMPLIED WARRANTIES, INCLUDING, BUT NOT LIMITED TO, THE IMPLIED WARRANTIES OF MERCHANTABILITY AND FITNESS FOR A PARTICULAR PURPOSE ARE DISCLAIMED. IN NO EVENT SHALL THE COPYRIGHT OWNER OR CONTRIBUTORS BE LIABLE FOR ANY DIRECT, INDIRECT, INCIDENTAL, SPECIAL, EXEMPLARY, OR CONSEQUENTIAL DAMAGES (INCLUDING, BUT NOT LIMITED TO, PROCUREMENT OF SUBSTITUTE GOODS OR SERVICES; LOSS OF USE, DATA, OR PROFITS; OR BUSINESS INTERRUPTION) HOWEVER CAUSED AND ON ANY THEORY OF LIABILITY, WHETHER IN CONTRACT, STRICT LIABILITY, OR TORT (INCLUDING NEGLIGENCE OR OTHERWISE) ARISING IN ANY WAY OUT OF THE USE OF THIS SOFTWARE, EVEN IF ADVISED OF THE POSSIBILITY OF SUCH DAMAGE.
1.15.6 Sound improvements.
1.15.5 Android 11 fix.
1.15.4 Setting for fake controller ID.This is useful on controllers or keyboards which lose their mappings.
1.15.3 Setting for using notch area on compatible devices. Fixes for file explorers and external ROM managers.
1.15.1 Android 10.0 support. Added default landscape layout for ultra wide phones. Improved portrait touch controller. Improved support to open zipped ROMs directly from file explorers. New builds with latest NDK, clang and libc++.